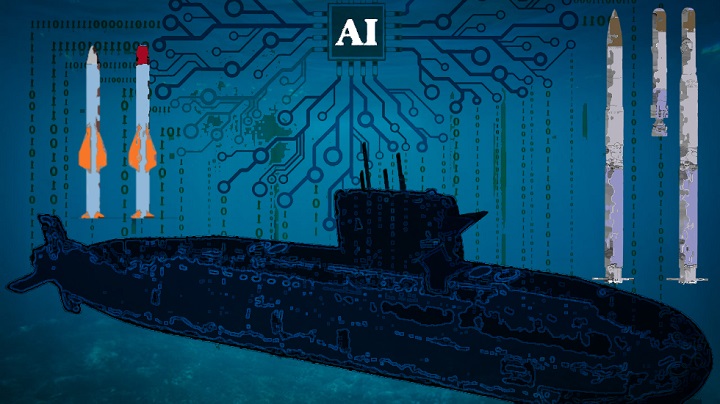 racking the development of weapons in recent years has shown that, after UAVs, flying robotic weapons, unmanned armored vehicles, and unmanned vessels, sooner or later it will be the turn of the submarines. In previous years, there were some reports of small UUVs usually in the size of a torpedo, or smaller, by countries such as the United States, the United Kingdom, and then China. The task of these UUVs was usually to collect oceanographic information used by manned submarines, as well as to run surveillance operations.

In recent years, the UUVs operations are getting more important, especially after Russia's ambitious Poseidon project, the XLUUVs league is also forming. What was surprising in this process was not the arrival of a new Western member in this small league, but the arrival of a member that no one expected. This new member was neither China, nor France, nor Japan, nor Germany...

On the sidelines of the launch of 100 missile speed boats, it was the IRGC navy that for the first time unveiled images of a prototype being tested on a very large UUV class. Although these images were very limited and no specific official information was released, the project had significant repercussions among domestic and foreign military experts and the media.

Among foreign experts, the most complete report was published by H. I. Sutton, which specializes in the field of submarines and has a thorough knowledge in case of Iranian submarines.

Of course, Mr. Sutton himself had previously speculated that the unmanned Iranian submarine would be based on Ghadir class, but in a recent article, he withdraws his statement considered it a new structure.

In the discussion of control, an important issue to consider is that the guidance of this UUV cannot be similar to an unmanned suicide boat like Ya-Mahdi, and the category of guidance and control underwater is a completely different category. Due to the impossibility of emitting electromagnetic waves underwater, it is not possible to use global positioning systems such as GPS in submarines during the dive, the same is true for local positioning systems (LPS). Therefore, for guidance and navigation in submarines, inertial guidance systems, Gyrocompass, hydrographic information, and seabed topographic scanning are used. Also, since it is not possible to have a live connection at long distances during diving, these submarine or UUV submarines must have a very high level of automation and A.I capabilities. They are not remote-controlled submarines, but autonomous robotic submarines. That's why in the published images, we also see the WIRED test of subsystems (probably submarine control commands). The roots of this project can be found in an interview, in February 2019.

Admiral Alireza Tangsiri, Commander of the Revolutionary Guard Corps Navy, said about the entry of this force into the field of construction and use of submarines:" one of our needs is midget submarine in Ghadir class but more advanced and of course submarines in Fateh and Khalij-e-fars classes. According to the interview, the IRGC's navy is looking for a more advanced submarine in the Ghadir class, but it has also made requests for larger submarines for its future.

So based on estimates, this XLUUV is not a new structure with dimensions about 10 meters length and 1.5 meters height. It is a more advanced submarine of the Ghadir class, mentioned by Tangsiri. And it is the result of changes to the Ghadir submarine structure, including the removal of the upper structure and the sail. The removed section is not part of the main body and structure of the submarine and is merely an additional section, as a platform for the deployment of the crew. Another sign that brings us to Ghadir is the effect of submarine secondary propeller turbulence near the surface of the water behind it. This effect and its size are quite different from the effect of the main submarine propeller, which is larger and produces more thrust and is also placed at a greater depth.

The reasons for this choice are also clear. More than 20 Ghadir class Midget submarines have been built in Iran, all of which are operational, with production lines, spare parts, and maintenance equipment fully available. And to produce it does not require the cost of design and development to build a new structure, its structural parts and propulsion do not require a new testing and development process, the problem of matching its weapon has already been solved. Therefore, this class provides a good platform that has tremendous potential to become a very large class UUV. 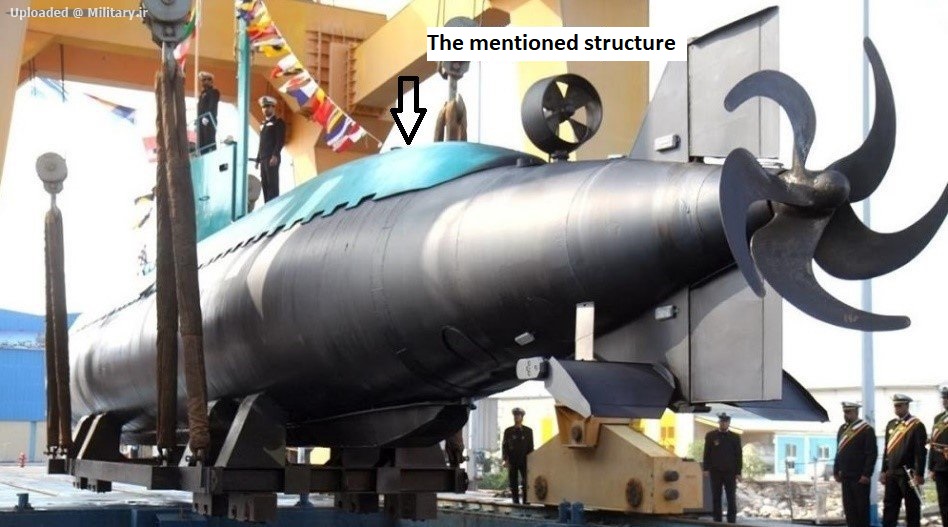 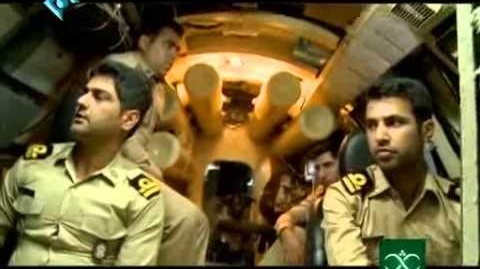 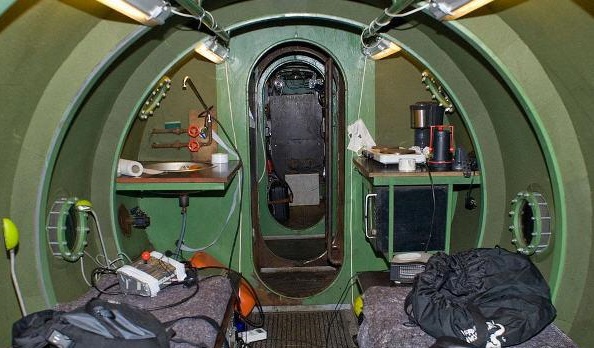 Spaces that are available to carry batteries, fuel, and other equipment

Another notable feature of this UUV in the firepower goes back to another part of Tangsiri's interview: In response to a question about the surface-to-surface missile that the IRGC used in one of its exercises a few years ago, he said: "We plan to use this missile in our submarines, but I can't tell more at the moment." The talks point to the testing of a special missile in the IRGC's navy, which is very like the former Soviet Union's ss-n-16 project. The missile was a multi-stage weapon that could be a combination of ballistic submarine-launched and torpedoes or cruises. The ss-n-16 missile could reach a range of 100 km in the version where the last stage was a torpedo. In addition to a much longer range than conventional torpedoes, the very high speed that can reach in a 100 km radius would deprive the enemy from an opportunity to escape or react. So in the offensive dimension, in addition to being used as a mid-range weapon with torpedo for the last stage, using this weapon, the IRGC can overcome another challenge. It is no secret that one of the pillars of the IRGC's power is its ability in the field of ballistic missiles, and of course what is more tempting than being able to use this capability in the submarines. But the main challenge for the IRGC in this area is to have a vessel capable of accepting such missiles. In the world, submarines capable of launching ballistic missiles are very large nuclear submarines that weigh up to tens of thousands of tons. There are two reasons for this. First, these submarines are used for strategic missile launches to carry and fire intercontinental ballistic missiles, which are very heavy. Secondly, these missiles need to be carried and launched vertically in the submarine, so given the height of these missiles, the submarine needs to have large dimensions, especially in terms of height. Horizontal launch methods from the torpedo tube, of course, have previously been used for cruise missiles, the most famous example of which is the Russian Klub missile. But the ss-n-16 horizontal launch method from the torpedo tube allows the IRGC to fire short-range ballistic missiles from these uncrewed submarines (by removing the last stage or replacing it with a larger warhead). This is unprecedented, and the IRGC navy could be the first military unit to use such a weapon in the world. The result will be a weapon that uses the mobility and secrecy of a midget submarine to get close to enemy vessels or bases and then uses the ballistic missile against the target. Because of the trajectory of this missile, it would be much more difficult to countermeasure than subsonic cruise missiles such as kalibr. This initiative I mean "using midget vessels to carry ballistic missiles horizontally” if get operational, will be a suitable weapon for the IRGC's asymmetric battle strategy.