US military part of the campaign to dump Trump in the Nov. election: Ex-US diplomat

Slaying the Goliath in Yemen

n August 2019, Iran’s long-range Bavar 373 air defense system was unveiled at an official ceremony attended by President Hassan Rouhani. The domestically-built system is the fruit of a decade of research and technology development. The project to develop such a missile defense system was initially launched after Russia suspended the delivery of its advanced S-300 batteries in 2010 under a deal reached with Iran three years earlier. The outcome, however, was not merely an Iran-made version of S-300 but a brand-new model in its entirety, even though it bears similarities in some parts to other air defense systems existing in the world. The achievement, in fact, paved the way for Iran to join a small club of countries in possession of the technology to design and manufacture such missile systems.

Bavar 373 is a hot launch system — unlike the cold launch method used in Russia’s S-300 — and benefits from cubical launchers instead of cylindrical ones. Despite certain similarities to the US-made Patriot, Bavar 373 is armed with a vertical launching system, or VLS, in sharp contrast to the slant launch system devised in the American missile system. Bavar 373 is a product of all such similar and different specifics and stands to be a unique air defense system, which was designed while taking into account the points of strength of other modern systems from across the global.

The system has a set of notable operational features, including detecting and engaging hostile targets or planes within a range of over 200 kilometers and using dynamic phased array radars, among them Meraj-4 with more than 10,000 elements, making it comparable to other similar air defense systems in the world; however, what gives the achievement its significance is that it constitutes Iran’s first ever operational success in the area of long-range air defense systems. The Islamic Republic accomplished that goal on the back of years of hard work and will, as a result, face fewer problems while taking the next steps.

Such has been the case with Iran’s ballistic missile program, which saw the country develop the expertise to produce Sejjil, Fateh missile family and Ra’ad-500 , Similarly, the country, after taking preparatory steps in the aerospace arena, managed to manufacture the state-of-the-art Qased satellite carrier, which is equipped with the solid-fuel Salman motor that has thrust vector control (TVC) capabilities. When it comes to unmanned aerial vehicles (UAVs), Iran has likewise succeeded in building Shahed 129 and Shahed 191 drones.

In February this year, Iran unveiled solid-fuel short-range Ra’ad-500 ballistic missiles, which are capable of carrying payloads of about 500 kilograms and travelling 500 kilometers. Footage released of the test of the tactical missiles indicates that the projectiles have a very low circular error probable (CEP). But what makes this type of missile special is not its solid fuel – which was already successfully used to propel Fateh 313 and other Fateh-class missiles forward. Fateh 313 can carry detachable warheads with composite material used in its body, while, by comparison, all body parts of Ra’ad-500 — including the shell of its solid-fuel propellants — are made of such material. According to the data released by Iranian officials, the all-composite body enables the missile to withstand temperatures as high as 3,000 degrees Celsius. Furthermore, the solid propellant and the type of fuel used in this missile have been designed anew. The new-generation Zoheir solid-propellant motors have more capabilities than their predecessors. All the improvements have led to Ra’d-500 having the same range as Fateh-313 with smaller proportions and half the weight.

Such technological upgrades and enhancements in the process of developing next-generation missiles to be loaded on Bavar 373 — which is currently using Sayyad-4 missiles with a range of more than 200 kilometers — will enable Sayyad-5 missiles to reach a range of 400 kilometers or even more. Besides its technological advantages, such an achievement will have a strategic impact on the Islamic Republic’s deterrent power and change the shape of potential battle grounds in the future. Possessing an air defense system with a firing range of 400 kilometers — whose every battery would cover a circle with a diagonal of 800 kilometers — could turn into Iran’s winning card and give its air defense the upper hand in the battlefield, especially while employing the strategy of A2/AD or Anti-Access Area Denial, something that will greatly compensate for the limitations of the country’s air defenses. Moreover, since Bavar, in its current version, is a fully mobile system, it has the capability to entirely change the dynamic of the battleground in case of deployment to new operation fields – if the need arises, through maintaining its mobility and maneuver ability. It will also be able to shake the structure of regional and extra-regional enemies’ power.

The following are images of the sites where next-generation Bavar is likely to be installed: 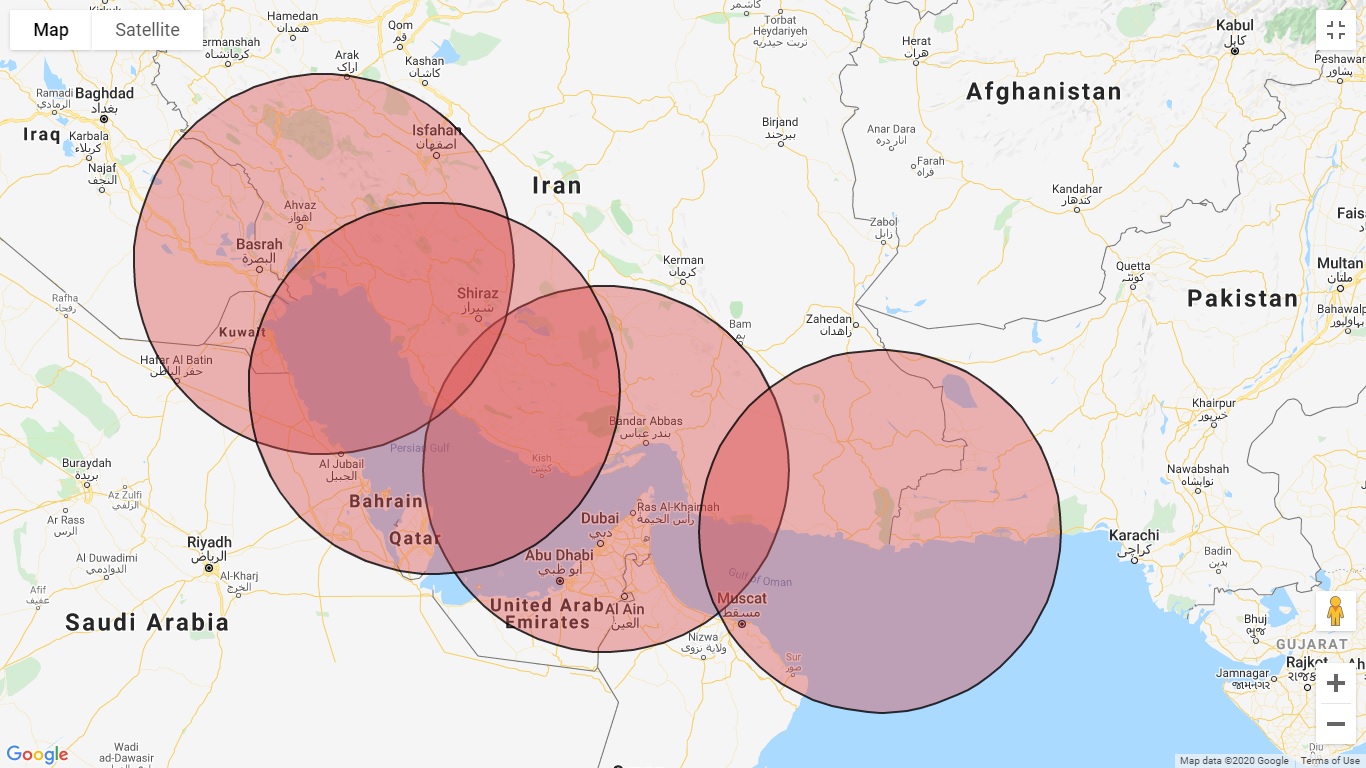 coverage of south coast in case of deploying 4 batteries 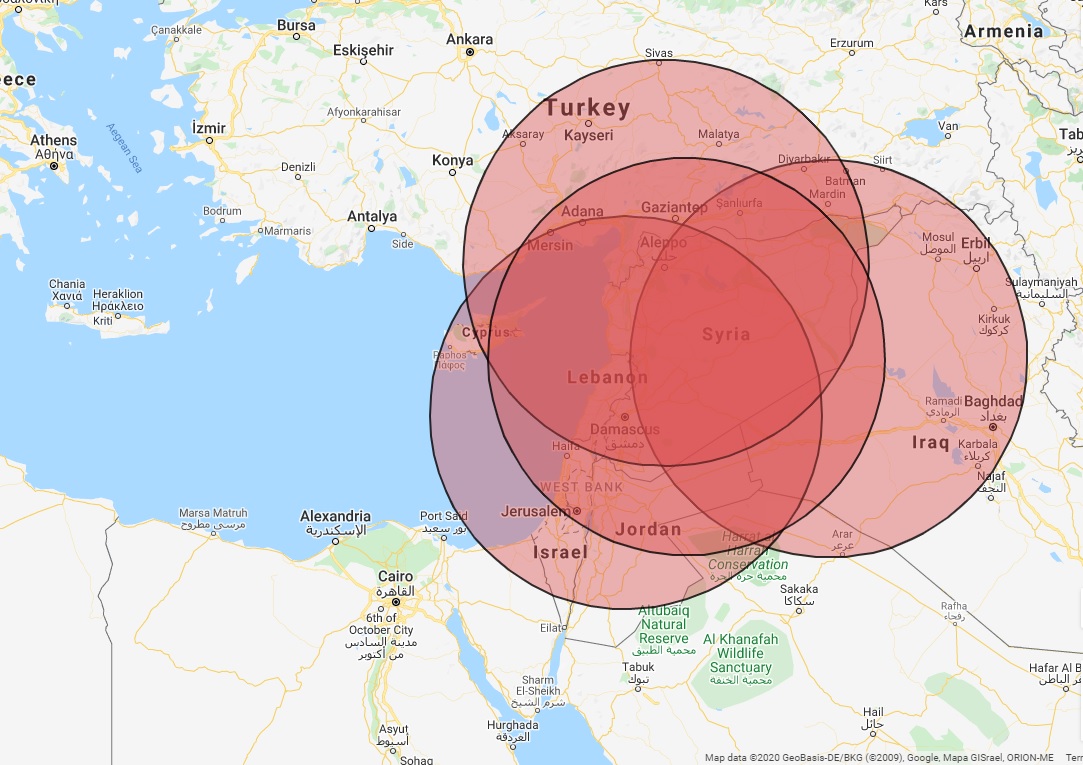 coverage of Syria air-space in case of deploying 4 batteries