A riot is the language of the unheard; will America listen? 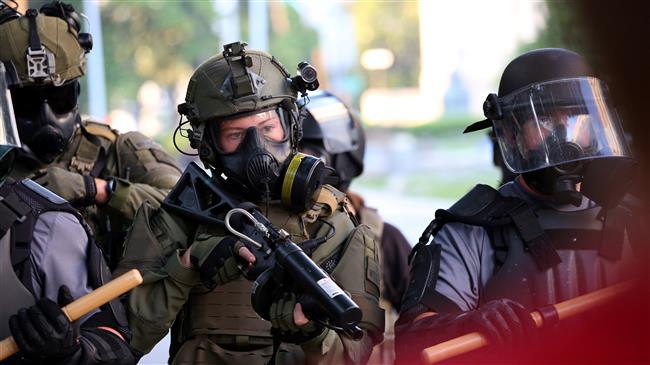 ritish Prime Minister Boris Johnson is coming under mounting pressure by Labour and civil rights groups to stop selling arms to the US which uses them to suppress the ongoing “legitimate protests” in cities across the United States over police brutality against African Americans.

According to government records, London grants export licenses worth millions of pounds for the sale of tear gas, riot shields, so-called “rubber bullets” and other small arms to the United States and based on the British government's own rules, such exports should be stopped when they are liable to be used for “internal repression”.

It would be a “disgrace” for the United Kingdom to continue selling arms to the US “at a time when Donald Trump is gearing up to use the US military to crush the legitimate protests taking place across America over the murder of black civilians,” Labour's shadow international trade secretary Emily Thornberry said.

"If this were any other leader, in any other country in the world, the suspension of any such exports is the least we could expect from the British government in response to their actions, and our historic alliance with the United States is no reason to shirk that responsibility now," Thornberry said in a letter to her government counterpart Liz Truss seen by The Independent.

"The British public deserve to know how arms exported by this country are being used across the world, and the American public deserve the right to protest peacefully without the threat of violent repression."

Meanwhile, other parties also supported the call for an arms embargo and investigation, including the Liberal Democrats who said the move was essential "given the evidence that [arms] are being used to target unarmed civilians."

The Green Party also called for licenses to be suspended "urgently" in addition to the SNP that said it would be "nothing short of hypocrisy" to turn a blind eye to what is happening in the US.

Human rights group Amnesty International alongside the Campaign Against the Arms Trade have previously led calls for the suspension of licenses, The Independent reported.

And as of Tuesday night, petitioners have already collected thousands of signatures urging an embargo, with a letter-writing campaign to parliamentarians also being organized on social media.

Meanwhile, a spokesperson for the Department for International Trade, which regulates arms sales, said that the government "will not grant an export license if to do so would be inconsistent with the Consolidated Criteria".

“The Consolidated Criteria provide a thorough risk assessment framework – they require us to think hard about the possible impact of providing equipment and its capabilities. These are not decisions we take lightly,” the spokesperson told The Independent.

The government has so far not responded as to what its plan is regarding the issue amid London’s interest in signing a trade agreement with the US to replace the favorable terms of trade with Europe lost after the UK left the EU. Protests erupted in US cities following the killing of George Floyd, a 46-year-old African American who died after a white policeman pinned his neck under a knee for nearly nine minutes in Minneapolis on May 25.

Federal officers have resorted to force to suppress the demonstrators, using gas and rubber bullets against the Americans who were peaceably protesting the brutal death of Floyd.