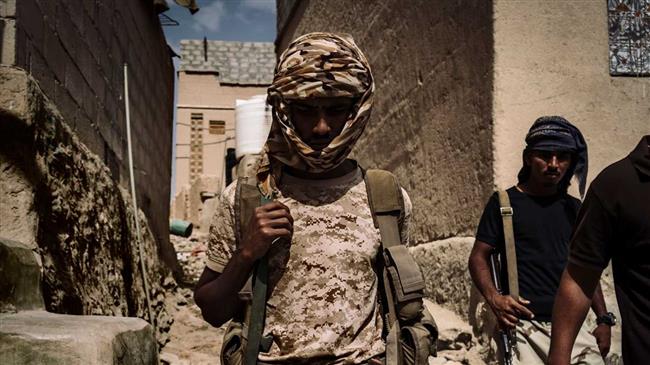 audi Arabia and the al-Qaeda militant group have reportedly been committing war crimes against the oppressed Yemeni nation in the form an “unholy” alliance.

The MintPress News, an online news website, reported on Friday that Saudi mercenaries and members of al-Qaeda’s branch in Saudi Arabia and Yemen, called al-Qaeda in the Arabian report said.

“In al-Jawf, the relationship between Saudi Arabia and AQAP was well underway by 2016 when the Kingdom launched a military campaign to take the province. Saudi and AQAP forces fought side by side, sharing the same weapons, trenches, operations command centers, resting places, and extremist ideals,” it added.

Peninsula (AQAP), closed their ranks in the beginning of the war on Yemen and jointly occupied the Jawf province using the same US-supplied weapons.

“Since 2015, when Saudi Arabia announced from Washington D.C. that it had launched a military campaign against the poorest country in the Middle East, it has been an open secret that both Saudi Arabia and the United Arab Emirates had formed an unholy union with al-Qaeda’s branch in Saudi Arabia and Yemen, known colloquially as AQAP, al-Qaeda in the Arabian Peninsula,” the

The report also noted that al-Qaeda boosted its recruitment in Yemen under the Saudi backing and turned Jawf into its stronghold in the impoverished country.

“AQAP has hobbled by in Yemen for years, feeding off the relentless cycle of poverty and hunger and only occasionally emerging from the shadows to claim credit for an attack or seek new recruits. It was not until 2015 when the group began to receive support from Saudi Arabia that it become brazen enough to emerge from its hiding places into the streets of al-Jawf’s towns. Generous Saudi backing meant that AQAP could boost recruitment, build new training camps and promote the organization’s ideology, an offshoot of the official Saudi state religion of Wahhabism,” it said.

Wahhabism is the radical ideology dominating Saudi Arabia, freely preached by regime-backed clerics there, and inspiring militant outfits such as al-Qaeda.

The al-Qaeda terrorists used abandoned homes in Jawf to stock weapons, make bombs and train militants, according to the report.

“By early 2020, AQAP had a sizable real estate portfolio in al-Jawf and Marib and ran most of the provinces’ large businesses. Sprawling villages in al-Jawf, the second largest governorate in Yemen, turned into strongholds of the organization after residents were forced to flee to other areas. AQAP turned some of the abandoned homes into factories used to manufacture explosive belts, IEDs and car bombs. Others were used to stock weapons, train militants,” it said.

Recently, the Yemeni armed forces managed to liberate Jawf after retaking the province’s Nihm district in a battle that left 2,000 Saudi-backed elements, including terrorists of al-Qaeda and Daesh, dead or captured. “By March, the Yemeni army had successfully subdued Nihm and advanced all the way to al-Jawf and Ma’rib. Now, for the first time in nearly 55 years, al-Jawf and most of Marib Province is under Yemeni control following decades of de facto rule by Riyadh through its various Yemeni proxies,” the report said.

With the liberation of Jawf, it added, Saudi-sponsored mercenaries left behind weapons and unexploded ordnances, with the remnants of cluster bombs still embedded in the ground.

“In their haste to escape the coming onslaught, Saudi forces left behind a slew of both medium and heavy weapons as well as the ammunition required to make them come to life. Whole stores of weapons, unexploded ordnance, and mines were abandoned, often amidst the tattered flags of Saudi Arabia and al-Qaeda and in huge tunnels reminiscent of those left behind in the wake of the wars in Syria and Iraq,” the report said.

In the Jawf villages of Khazaf and al-Marwan, the al-Qaeda militants turned homes into secret jails, with complex tunnels systems used to hold and torture prisoners.

“Inside one home that turned it into a makeshift AQAP prison, we saw four three-square-meter windowless cells with heavy steel doors. As we made our way from cell to cell, I was struck by the sight of a pile of woman’s clothing, a prayer outfit, and a baby’s diapers, all piled into a morbid testament of the crimes committed here. I also found a note, a scrap of paper with the following scribbled onto it: “I am Um Assamah, Why did you imprison me and my three daughters?” the report explained.

A 60-year-old resident told MintPress that the place was a women’s prison that “from outside it looked like simple houses but when we entered, we found cells, tunnels, and implements of torture.”

In the city of al-Hazm, Jawf’s provincial capital, a mother recounted how her daughter Samirah Hezam Maharesh, a mother of three young girls, was kidnapped from her home by armed militants loyal to Saudi Arabia on July 5, 2018.

“Two years have passed since they kidnapped my daughter,” she told MintPress.

Samirah was first taken to a secret prison in al-Hazm and then transferred to another detention facility, the report said. Her whereabouts are still unknown.

Last week, Saudi jets pounded Khazaf and al-Marwan in a bid to conceal their involvement in the crimes against the Yemeni people.

Such air raids, the report said, are meant to cover up“untold war crimes occurred in the forgotten desert villages.”

According to a tally released last November by the Armed Conflict Location and Event Data Project or ACLED, more than 100,000 Yemenis have been killed in the Saudi war.

The Western-backed bombing campaign, coupled with a naval blockade, has plunged Yemen into what the UN says is the world’s worst humanitarian crisis.