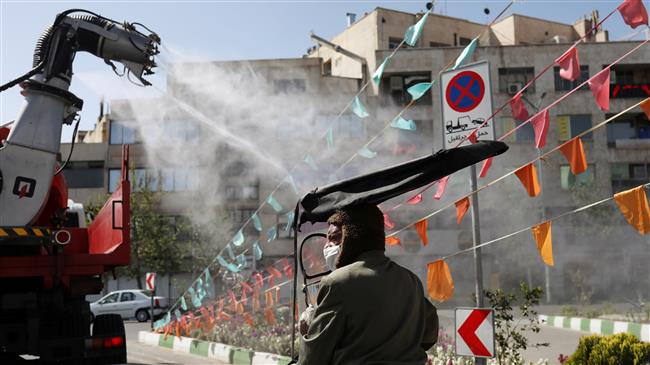 Iranian Foreign Minister Mohammad Javad Zarif has announced Iran and China’s condemnation of the illegal and unilateral US sanctions against the Islamic Republic as the country is doing its best to bring under control a deadly outbreak of new coronavirus, known as COVID-19.

“I am very delighted to have spoken to my old friend Wang Yi, China’s foreign minister and State Councilor,” Zarif tweeted in Chinese on Thursday, referring to the phone conversation that took place between the top diplomats a day earlier.

“I thanked China for sending over aid and a medical team to help Iran’s confrontation with the coronavirus, and [we] condemned the illegal US sanctions that act as a big obstacle in the way of Iran’s efforts to battle the virus,” he added.

According to the Iranian foreign minister, the conversation also featured issues of common interest such as deepening of the comprehensive strategic collaboration between the countries and the subject of peace and stability in Afghanistan.

The US reinstated its sanctions against Iran in May 2018 after leaving a United Nations-endorsed nuclear agreement with the Islamic Republic and five other major powers -- the UK, France, Russia, and China plus Germany.

Tehran sued Washington at the International Court of Justice afterwards. The tribunal ruled that the US should lift its sanctions on humanitarian supplies.

Washington, meanwhile, claims that it has exempted foodstuffs and medicine from the bans. Tehran roundly rejects the claim as a “brazen” lie.

Zarif has written to the UN and all international organizations, urging removal of the draconian measures and underlining their counterproductive effect on Iran’s fight against the viral outbreak. Since emerging in central China late last year, the novel virus that can lead to a potentially fatal respiratory infection called Covid-19 that has killed nearly 136,000 and infected close to 2,100,000 people worldwide.

Also on Wednesday, Zarif posted another tweet, hitting out at the US for deciding earlier to halt funding to the World Health Organization amid the pandemic, saying the world might now better realize Tehran’s long experience of bearing the brunt of Washington’s deadly bullying. “The world is learning what Iran has known & experienced all along: US regime's bullying, threatening & vainglorious blathering isn’t just an addiction: it kills people,” he wrote.

“Like "maximum pressure" against Iran, the shameful defunding WHO amid a pandemic will live in infamy,” he added.

US President Donald Trump said on Tuesday that he was halting funding to the WHO while a review is conducted to assess the agency’s “role in severely mismanaging and covering up the spread of the coronavirus.”

The declaration drew harsh criticism, even from the US’ allies, including the Europeans.

By announcing a halt to the WHO’s funding, critics argue, the White House is undermining the international response to COVID-19 and other serious diseases, in an attempt to distract attention from questions over its own handling of the health emergency.