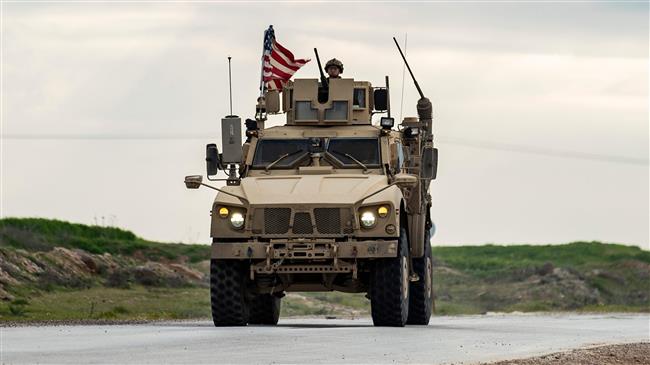 he United States has dispatched truckloads of military and logistical equipment to Syria’s northeastern province of Hasakah as Washington and some of its regional allies keep vying with one another to seize oil reserves and plunder natural resources in the war-battered country, Syrian media say.

Local sources, speaking on condition of anonymity, told Syria’s official news agency SANA that a convoy of 35 trucks crossed into the Syrian territory on Saturday, and headed toward US positions in the Shaddadi district of the province. In late October 2019, Washington reversed an earlier decision to pull out all of its troops from northeastern Syria, announcing the deployment of about 500 soldiers to the oil fields controlled by Kurdish forces in the Arab country.

The Pentagon claimed that the move was aimed at protecting the fields and facilities from possible attacks by the Daesh Takfiri terrorist group. That claim came although US President Donald Trump had earlier suggested that Washington sought economic interests in controlling the oil fields. US Secretary of Defense Mark Esper also threatened that the US troops deployed to the fields would use “military force” against any party that might seek to challenge control of the sites, even if it were Syrian government forces or their Russian allies.

Syria, which has not authorized American military presence in its territory, has said the US is “plundering” the country’s oil.

Separately, the so-called Syrian Observatory for Human Rights (SOHR) reported that Turkey had dispatched another military convoy to Syria’s northwestern province of Idlib.

Moreover, Turkish military forces fired several rockets at Kurdish-controlled towns of Harbal and Sheikh Issa in the northern sector of Aleppo province. There were no reports of injuries as a result of the shelling. Turkish Defense Minister Hulusi Akar announced on March 13 that the Russian and Turkish militaries had agreed on the details of a new ceasefire in the Idlib de-escalation zone following four days of talks in Ankara.

Within the framework of the agreement, Akar said, the first joint patrol by Turkey and Russia on the strategic M4 highway in Idlib would take place on March 15, and that Turkey and Russia will set up joint coordination centers in the area.

The announcement followed a telephone call between Russian President Vladimir Putin and his Turkish counterpart Recep Tayyip Erdogan the previous day to discuss the implementation of the agreements the two leaders had reached in Moscow the previous week.

“Vladimir Putin and Recep Tayyip Erdogan reaffirmed the importance of continued close joint efforts, first of all between the Russian and Turkish defense ministries, in order to ensure a stable ceasefire and further stabilization of the situation,” a Kremlin press release read.

“It was agreed to maintain a regular dialogue at various levels, including personal contacts,” the statement added.