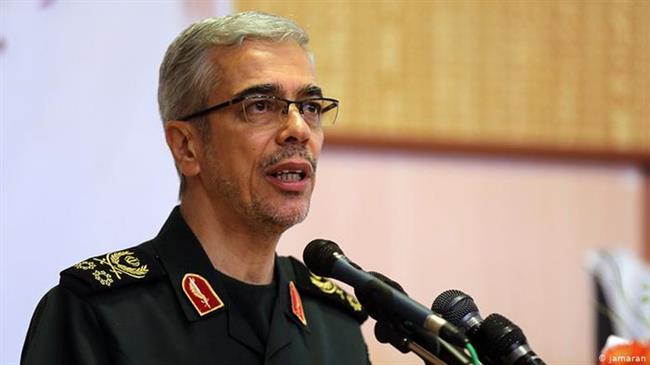 he chairman of the Chiefs of Staff of the Iranian Armed Forces says the country will show the most severe reaction to the United States if it does anything to undermine the security of the Islamic Republic.

“If [Americans] take the smallest step against the security of our country, they will be faced with the most severe reaction,” Major General Mohammad Baqeri said on Thursday in allusion to recent steps taken by the US military in neighboring Iraq, which have been seen by many experts as a prelude to a possible US attack on Popular Mobilization Units (PMU) in the Arab country.

“The recent days have witnessed an increase, to some extent, in the US’ military activities across Iraq and the Persian Gulf,” he said.

“On the psychological and media fronts too, they (Americans) are engaged in massive dissemination of news denoting that they have plans against resistance groups in Iraq and Hashd al-Sha’abi,” the Iranian general said in reference to the PMU anti-terror fighting force by its Arabic name, adding, "We are completely monitoring such activities".

On Wednesday, US President Donald Trump claimed that Iran was about to launch an attack on US troops or American “assets” in Iraq, waring, "If this happens, Iran will pay a very heavy price, indeed." Meanwhile, an Iraqi security source said a group of US troops had withdrawn from al-Taqaddum Air base in al-Anbar, and moved to Ain al-Assad Air base in the western Iraqi province. There have been other reports that US forces are handing over more military bases to Iraqi forces and taking their troops to more secure facilities elsewhere in Iraq.

Trump’s remarks were the latest in the torrent of US claims accusing the Islamic Republic of trying to target the terrorist US forces in the Arab country. Previously, Washington had repeatedly tried to pin sporadic rocket attacks on installations housing the forces on, what it calls, “Iran-backed” Iraqi fighters, and threatening Tehran with “retaliation.”

Iran has, on every occasion, denounced the US claims as baseless, and an attempt at stirring up regional and international tension against the Islamic Republic.

Elsewhere in his remarks, General Baqeri referred to the actions taken against American bases across Iraq over the past recent weeks as “the Iraqi people's and resistance forces’ natural reaction to the sinister assassinations carried out by Americans” in the Arab country in early January.

On January 3, a US drone strike assassinated Lieutenant General Qassem Soleimani, the commander of the Quds Force of Iran’s Islamic Revolution Guards Corps (IRGC), Abu Mahdi al-Muhandis, the PMU’s second-in-command, and a number of others, targeting their vehicle in Baghdad. At the time of the attack, General Soleimani was on an official trip in the Iraqi capital at Baghdad’s request.

The IRGC retaliated against the assassination by launching volleys of ballistic missiles against Ain al-Assad military base.

Clarifying Iraq’s “natural reaction” to the US’ atrocities, Baqeri said, “The Americans are, themselves, well aware that the peoples of the region, including that of Iraq, are against the US’ military presence in these countries.” Soon after the assassinations, the Iraqi parliament overwhelmingly ratified a bill demanding complete withdrawal of all American-led forces from the Arab country’s soil.

The United States invaded Iraq in 2003 on the second leg of its so-called war on terror, which had had it first stage a no-holds-barred attack against Afghanistan.

Unremitting violence continues to plague both countries since then, with anti-American sentiment and US-led foreign presence being blamed for much of the unrest.

Washington staged a renewed wholesale operation in Iraq in 2014 at the head of a number of its Western and regional allies, presumably seeking to uproot the Takfiri terror group of Daesh. The outfit had risen amid the chaos and volatility resulting from the 2003 US-led invasion of Iraq.

The US-led coalition retains its presence in Iraq, although, Baghdad and its allies defeated Daesh in late 2017.

“Such reactions have nothing to do with our country. Americans happen to attribute this issue to us in some cases, which is [their way of] playing the blame game,” Baqeri said, adding, “The Islamic Republic does not play any role in such developments, and bears no intention to target any foreign forces [in Iraq].”