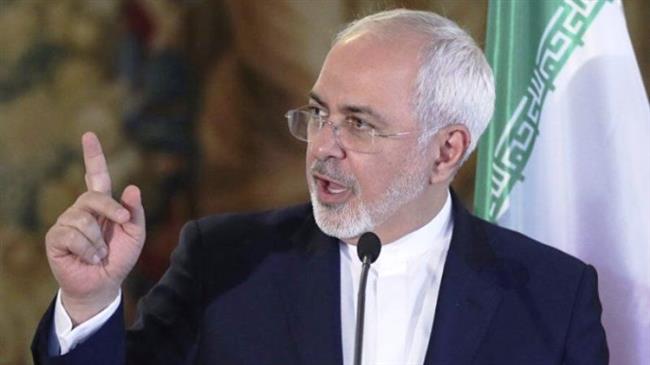 ran’s top diplomat has dismissed US President Donald Trump’s claim that Tehran is about to launch an attack on American troops in Iraq, reaffirming the stance that the Islamic Republic will not initiate any war but it will decisively respond to aggression.

“Iran starts no wars, but teaches lessons to those who do,” Mohammad Javad Zarif tweeted on Thursday, a day after Trump claimed that “Iran or its proxies are planning a sneak attack on US troops and/or assets in Iraq” citing “information and belief.”

Zarif dismissed Trump’s allegation, saying Iran has no “proxies” but friends in Iraq. Iran was the first state that rushed to Iraq’s help in 2014 after the Daesh terror group emerged in the country and seized control of vast swaths of territory there.

Washington views Hash al-Sha’abi — an official Iraqi military force — as Iran’s “proxy.” Angered by the Iran-backed defeat of Daesh, Trump ordered the US military to assassinate top Iranian and Iraqi anti-terror commanders Lieutenant General Qassem Soleimani and Abu Mahdi al-Muhandis in a drone strike in Baghdad, sending anti-US sentiments soaring both in the two neighboring states and the entire region.

“Don’t be misled by usual warmongers, AGAIN, @realDonaldTrump: Iran has FRIENDS: No one can have MILLIONS of proxies. Unlike the US — which surreptitiously lies, cheats & assassinates — Iran only acts in self-defense,” tweeted Zarif.

Last week, the US Treasury Department imposed sanctions against 20 companies, claiming that they provided support for Iran’s Islamic Revolution Guards Corps (IRGC), and the IRGC’s Quds Force, as well as Iraq’s Kata’ib Hezbollah, a pro-government resistance group, and Asa’ib Ahl al-Haq movement, a subdivision of the PMU.

Tehran has time and again asserted that US threats and allegations are baseless and that it stands ready to defend its interests in the region.

Meanwhile, Iraqi security sources said on Sunday that new US troops had been deployed to Ain al-Asad base in the western Iraqi province of Anbar amid reports that the Pentagon was preparing for a new escalation in the Arab country.

On Thursday, Kata’ib Hezbollah — a major faction of Iraq’s Popular Mobilization Units (PMU) — revealed that the US military was preparing to carry out massive aerial operations — backed by ground troops – against bases of the force, which is currently busy helping Baghdad in the fight against the coronavirus pandemic.

A day later, The New York Times reported that the Pentagon had ordered planners at the US military’s Central Command and in Iraq to draw up a strategy to dismantle Kata’ib Hezbollah.

However, the American’s top commander in Iraq has warned that such a campaign could be bloody and counterproductive and risks war with Iran.

Iraqi resistance forces have vowed a firm response to any aggression.

The stepped-up US military activities come in defiance of an Iraqi parliament vote in January that called for an end to the presence of all foreign troops, including some 5,200 American forces.

Earlier this month, US-led coalition forces withdrew from three bases in Iraq in line with Washington’s plans to consolidate its troops in other locations in the Arab country.

A top military advisor to Leader of the Islamic Revolution Ayatollah Seyyed Ali Khamenei cautioned Washington on Wednesday of consequences of “provocative actions” in Iraq.

“We advise US politicians and military to take responsibility for the consequences of their provocative actions (in Iraq),” Major General Yahya Rahim Safavi said.

“Any US action will mark an even larger strategic failure in the current president’s record”, he warned.