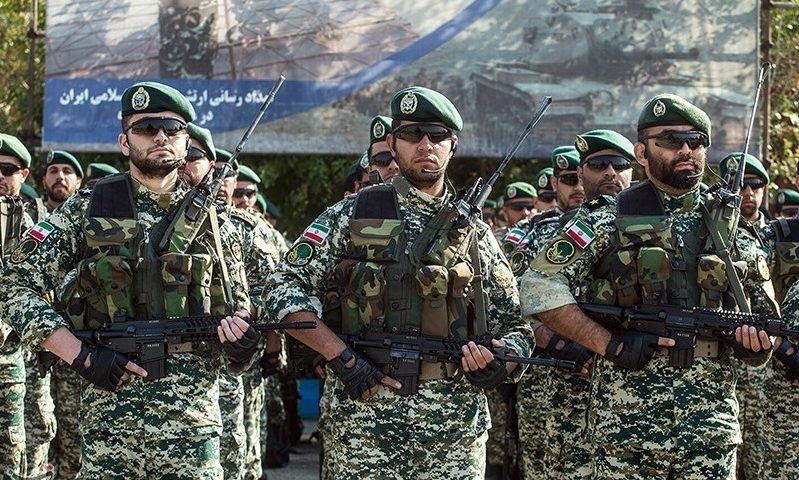 n July 2019, Brigadier General Ahmadreza Pourdastan, head of the Iranian Army’s Strategic Studies Center, announced the formation of rapid deployment units tasked with responding to proxy and hybrid warfare and said, “In hybrid warfare, delaying operations and attrition tactics will not yield result. It was during proxy wars that the General Staff of Iran’s Armed Forces ordered the establishment of five rapid reaction units in the military — four in the Army and one in the Navy — and another five in the Islamic Revolution Guards Corps (IRGC).”

The senior general explained that these “units” are meant for swift response “in nature,” which means they are highly flexible. They have great fire power and aircraft at their disposal and can reach the operation zone in the shortest time possible to fulfill their mission. Rapid reaction units, as the name suggests, have a duty to deploy from the earliest moments of an incident or enemy threats and give a due response. That is why the force is known as the arrowhead of an army’s operational units. The speedy intervention of the rapid reaction force provides other army units with a window of opportunity to recover from the potential initial shock and begin to advance against the enemies.

It could be said that the Iranian Army’s senior commanders are gradually getting to realize the importance of the element of “time” in modern battles, an issue which had largely went unnoticed in earlier military analyses. But how important is it to organize such units and take the element of time into account?

In the early years of the 19th century, Arthur Wellesley, 1st Duke of Wellington, was of the opinion that “time is everything” in military operations. “Viewing time as a nonspatial continuum in which events occur in a sequential, irreversible order as determined by time is the first step in conceiving of time as the fourth dimension. One can describe and define something fairly accurately through the spatial dimensions of length, width, and height, but to place it in its complete context, one must also describe its place in time,” according to the prominent British military figure of his era.

Clausewitz (1780 – 1831) was perhaps the first military theorist, who studied the element of time in the context of the principles of planning military operations. In his famous book ‘On War,’ Clausewitz devoted an entire chapter to ‘Assembly of Forces in Time.’ Following him, Sir Basil Henry Liddell Hart, another British military theorist, similarly laid emphasis on the element of time. He considered speed to be the determining factor in an army’s defeat or victory. Liddell Hart attributed the shock fall of the French army in 1940 to the element of time. He believed the lightning operation by the Wehrmacht — the unified armed forces of Nazi Germany — overwhelmed the French defense forces, who suffered psychological paralysis. All in all, these theorists argued that five major factors should be taken into consideration while planning a military operation: Continuity, speed, timing, sequence and simultaneity.

Now the question is, why does the Iranian Army’s Ground Force consider the element of time to be the main factor behind the formation of rapid reaction units? The answer lies in the military literature in the 21st century, especially with regards to action in the battle zone. In fact, combat operations in the present and future — unlike the previous century — are nonlinear and unpredictable, making it necessary to divide the armed forces into smaller units and combine missions in a continuous and nonstop process. In other words, the battlefield in the 21st century demands smaller but more effective divisions of armed forces, who are more self-confident, creative and responsible and have the trust of their superiors when it comes to their sense of judgment and response the moment they face the enemy. Naturally, the element of time is directly linked to the element of speed as the main characteristic of rapid reaction units, but why has the element of speed become more important in this century? The answer is: To break the enemy’s will for resistance, one must pass through its kill zone. For instance, the emergence of muzzle-loading firearms paved the way for the armies to maneuver at a speed of four kilometers per hour, while modern militaries can do so at a speed of 20 kilometers an hour. This, of course, needs small combat units armed with state-of-the-art and highly mobile military equipment, something that necessitates tactical air transportation activities.

Normally, an organization’s dimensions, shape and logistics constitute the pillars of a rapid reaction force. In other words, the role of logistics in the maximum efficiency of a rapid deployment unit could be summarized in two points: 1) Setting the stage for passing through the enemy’s kill zone 2) Paving the way further for the unit to reach the combat zone.

The benefits of rapid reaction units were explained above, but what are the challenges that such divisions could pose to the Iranian Armed Forces? The main challenge is related to the aerial capabilities of the Armed Forces in transferring rapid reaction forces to the battle zone. At the tactical level, the transfer of rapid reaction units to the battle zone demands a fleet of tactical transport helicopters and the necessary back-up equipment such as armed combat copters. This could pose a serious challenge to the Iranian Army Aviation given its old transport fleet — including Boeing CH-47 Chinook helicopters and a small number of Russian-made Mil Mi-17 helicopters — which has not been upgraded to get equipped with effective self-defense systems. No improvements have also been made to the structure and propellants of the copters. Another serious issue is the aging fleet of the Iranian Air Force’s Hercules aircraft, which practically hampers the transfer of required forces and hardware in times of emergency.

In addition, given the enemies’ capability to maintain superiority in the air and a lack of investment in promoting the Air Force following the ex-Iraqi regime’s war on the Islamic Republic in 1980s, the Iranian Armed Forces will definitely face a challenge in creating a safe corridor for the transfer of its rapid deployment units to the battle zone.

In general, efforts to enhance Iran’s rapid response forces signal a change in the viewpoint of the country’s commanders on modern battle scenes; however, in harmony with such a change, it is highly important to prioritize developing that viewpoint and set the stage for the new strategy to bear fruit.