Iran Leader: We have to strengthen ourselves to avoid war 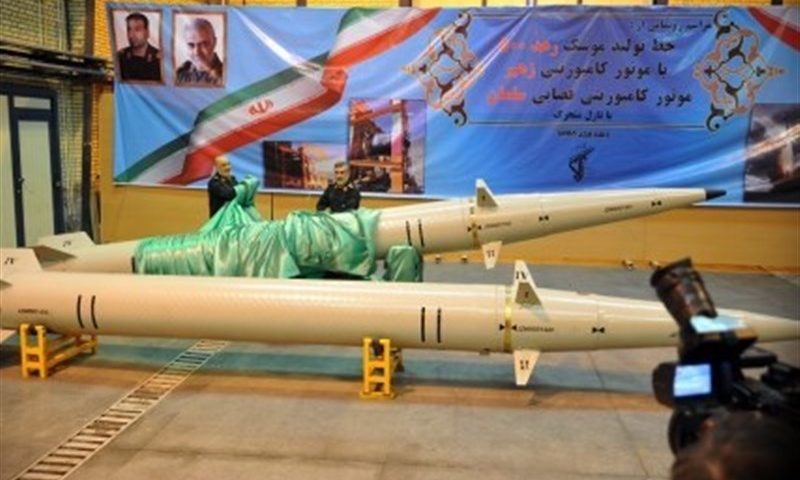 ran has unveiled a new missile, 'Ra’d-500 (Lightning-500),' which is equipped with a composite engine block as well as the new generation of propellant for missiles and satellite carriers.

During a ceremony attended by the chief commander of the Islamic Revolution Guards Corps (IRGC), Major General Hossein Salami, on Sunday, it was announced that the new missile takes advantage of two types of composite engine blocks and adjustable nozzle.

The event was also attended by commander of the IRGC’s Aerospace Division Brigadier General Amirali Hajizadeh.

The new missile’s composite engine block, which contains carbon fibers, can withstand pressures as high as 100 bar and a temperature of 3,000 degrees Centigrade, while the composite component has allowed Iranian engineers to reduce the weight of the missile to a large extent.

Compared to Fateh-110 missiles, the new Ra’d-500 missile’s weight has been cut by half while its range has been increased by 200 kilometers.

The new Iranian missile paves the way for the production of new satellite carriers operating on solid fuel and allows Iran's surface-to-surface missiles to penetrate various kinds of missile shields by projecting a small cross-section on the radar screen.

Addressing the ceremony, the commander of the IRGC’s Aerospace Division said by developing the adjustable nozzle technology, it is possible to control solid-fuel missiles beyond the atmosphere in spacecrafts, satellite carriers and anti-armor missiles.

He added that expenses of Iran's Armed Forces are far lower than those of other countries, saying that the composite body of the new missile has been designed in a way that it can be used in surface-to-surface and air defense missiles.

He pointed to Iran's progress in the fields of manufacturing precision-guided missiles and smart air defense systems, saying that the domestically-built Bavar-373 missile defense system, which has a range of 120 kilometers and can reach an altitude of 27 kilometers, is one of the most important defense achievements of the country after the victory of the Islamic Revolution.

It is a mobile missile defense system designed to intercept and destroy incoming hostile targets. The system employs missiles that have a maximum range of 300 kilometers and is capable of simultaneously detecting up to 300 targets, tracking 60 targets at once and engaging six targets at a time.

Iran has repeatedly said its military might poses no threat to other countries, and that its defense doctrine is based on deterrence.