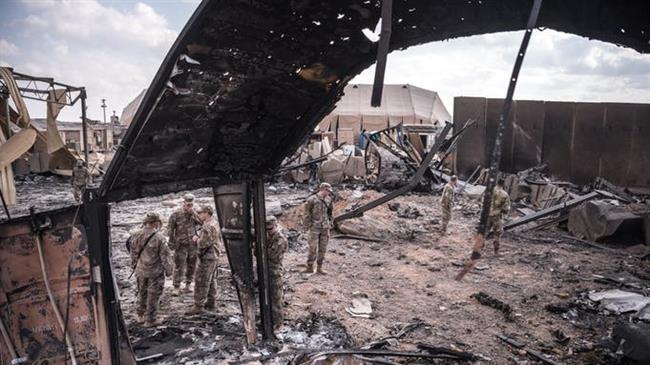 he spokesman for the Islamic Revolution Guards Corps has said that Washington’s alleged numbers of “brain injuries” in its troops following the Iranian retaliatory missile strike on the Ain al-Assad airbase represent the number of dead troops.

“We conclude that what the United States announces to be related to brain injuries from the attack on Ain al-Assad to be a metaphor for dead US troops,” Brigadier General Ramezan Sharif wrote for Iran’s Vatan-e-Emrooz daily on Saturday.

“I believe that that the term ‘brain trauma’, whether mild, moderate or severe, reflects the number of dead, which they hesitate to formally announce,” he said.

The spokesman added that “brain injuries” is an unusual and vague expression in common military terming wherein all injured troops, even mild ones, are classified as being “injured”.

Sharif noted that his assessment regarding US casualty numbers was based on obtained information regardless of the fact that 13 large missile impacts from the Iranian attack are expected to cause “considerable casualties” among US troops.

On January 8, Iran retaliated to the assassination of top General Qassem Soleimani by launching a volley of ballistic missiles at the US-occupied Ain Al Assad base in Iraq and another outpost in Erbil, the capital of the semi-autonomous Iraqi Kurdistan.

Despite initially claiming that the attack resulting in no casualties, the Trump administration has since gradually announced casualties from the Iranian attack, most recently claiming that 64 US troops have suffered from “traumatic brain injuries”.

he spokesman added that based on common death-to-injury ratios resulting from explosive blasts in military conflicts, the number of injured from such attacks is usually “three to four times” larger than the number of dead.

Shairf said that Washington is seeking to censor the true casualty count from the American public in order to cover its vulnerability towards probable future retaliatory strikes after the Ain al-Assad attack, which was considered as only a “first slap”.

“Surely as we approach the US Presidential election, more numbers and names related to the dead will be leaked along with the competition among the parties,” he added.

‘US has to anticipate harsher responses’

Speaking on Friday, senior spokesman for Iranian Armed Forces Brigadier General Abolfazl Shekarchi said that Washington has to anticipate harder responses from Iran if it continues with its policy of “maximum pressure” against Iran.

Underlining the significance of the Ain al-Assad attack, Shekarchi said that the missile strikes marked Iran’s first ever formally announced operation against the US.

The spokesman added that Iran’s approach in countering foreign provocations has shifted to offensive measures and is no longer limited to defensive action.