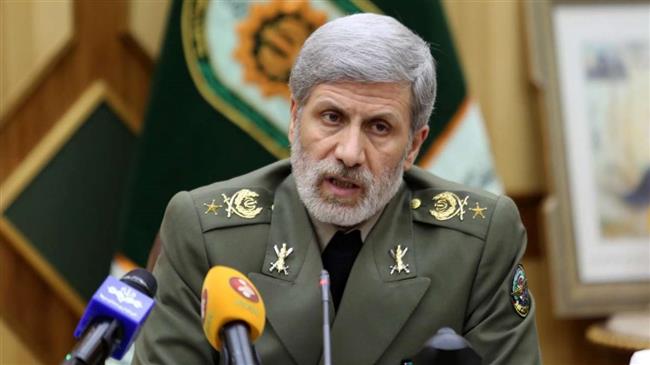 ran's Defense Minister Brigadier General Amir Hatami says following Tehran’s firm missile response to the assassination of its top general by terrorist US forces in Iraq, the US had no choice but to finally give in to the resolve and power of the Islamic Republic.

“Without a doubt, if the enemy had not received such a response, it would have taken further steps in line with its arrogant nature with more audacity, but it finally submitted to firm resolve and the power of the Islamic Republic of Iran,” the minister noted.

On January 3, the United States assassinated Lieutenant General Qassem Soleimani, who used to command the Quds Force of Iran’s Islamic Revolution Guards Corps (IRGC), among others in a set of airstrikes against Baghdad. General Soleimani has earned reputation as West Asia’s most revered anti-terror commander due to his indispensible contribution to defeating terrorist outfits such as Daesh across the region.

Leader of the Islamic Revolution Ayatollah Seyyed Ali Khamenei warned afterwards that a “harsh revenge” awaited the US.

The IRGC fired volleys of ballistic missiles last Wednesday in retaliation, hitting the US’s Ain al-Assad air base in the western Iraqi Anbar Province, and another facility in Erbil, the capital of the semi-autonomous Iraqi Kurdistan, both of which housed American forces.

IRGC’s Deputy Commander for Operations Brigadier General Abbas Nilforoushan revealed afterwards that even though intelligence had shown that the US forces were on high alert across the region at the time, none of the missiles had been intercepted.

Nilforoushan added that the projectiles had “precisely hit their intended targets,” and said the counterattacks “managed to destroy the arrogance’s command center in the region,” referring to Ain al-Assad.

Elsewhere in his remarks, the Iranian defense chief said until before the IRGC’s revenge attacks, American commanders “had fallen into the habit of flaunting their shaky power by simply unleashing heavy firepower onto enfeebled countries and defenseless nations.”

Iran's retaliatory missile attack had them “feel the searing heat from the IRGC’s missile power for once at least,” he noted.

Hatami said he hoped that the country’s enemies would not go about testing its people’s resolve again, echoing recent remarks by the Leader that the retaliation was only “a slap.”

Currently, none of the enemies can afford to harbor any aggressive intentions against the country given the remarkable progress that has been attained by the Defense Ministry in the fields of ground, naval, aerial, missile, and electronic warfare, he asserted.

The official said Iran’s defense industry has grown hundreds of times bigger and achieved self-sufficiency compared to 1979, the year the country celebrated its Islamic Revolution after deposing the US-backed Pahlavi regime.

It, however, is now faced with economic warfare, Hatami said, referring to the US’s renewed sanctions and Washington’s attempts at forcing the world into stopping business with the country.

“God willing, though, we will still frustrate the enemy in its attempts at implementing its plots and machinations against the great Iranian nation, in the same way that we emerged victorious out of crises during the eight-year [imposed] war [with Iraq],” he concluded.

The official was referring to Iraq’s heavily Western-backed war of the 1980s against Iran that was being compounded by US-led bans targeting the Islamic Republic.