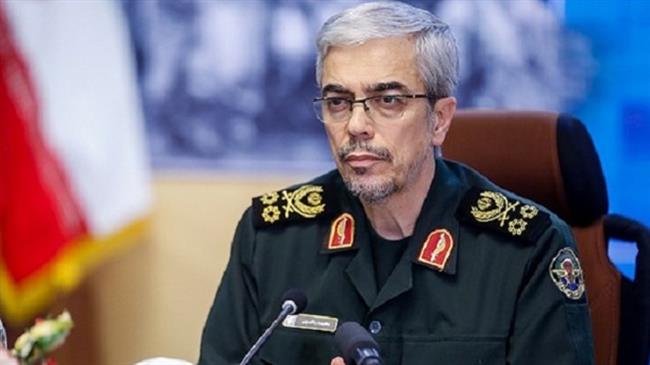 hairman of the Chiefs of Staff of the Iranian Armed Forces Major General Mohammad Baqeri says the Islamic Republic is not interested in escalation of tensions in the region, but is ready to give a crushing response to any act of aggression.

“Iran is not interested in further escalation of tensions, but will give a crushing response to any irrational action and act of aggression, and we hope that withdrawal of the US from the region would put an end to all [the existing] chaos and conflicts,” Major General Baqeri said in a phone call with Turkish Defense Minister Hulusi Akar on Thursday.

Baqeri said the United States touched off “a new round of tensions in the region” through its recent assassination of Lieutenant General Qassem Soleimani, who commanded the Quds Force of Iran’s Islamic Revolution Guards Corps (IRGC), and other acts of aggression, namely attacks targeting the headquarters of Iraq’s Popular Mobilization Units (PMU) and some outposts in Syria.

Soleimani, who has earned reputation as West Asia's most revered anti-terror commander due to his indispensable contribution to defeating terrorist outfits such as Daesh across the region, was martyred in a set of US airstrikes on January 3 in Baghdad. The strikes also led to the martyrdom of some others, including Abu Mahdi al-Muhandis, the PMU’s second-in-command.

In retaliation, the IRGC fired volleys of ballistic missiles last Wednesday at the US’s Ain al-Assad air base in the western Iraqi Anbar Province, and another facility in Erbil, the capital of the semi-autonomous Iraqi Kurdistan, both of which housed American forces.

Elsewhere in his remarks, Baqeri expressed his gratitude towards Akar for his condoling with the Islamic Republic over General Soleimani’s martyrdom, calling the atrocity that led to the late commander’s assassination a “disingenuous, inhumane, and immoral action that defied all legal and international principles.”

At the same time that they had put the region on the edge of large-scale conflict with the assassination of Lt. Gen. Soleimani and his companions, the Americans sent messages to Iran, purportedly seeking to prevent further escalation, Baqeri added.

Nevertheless, Iran’s revenge attacks against Ain al-Assad displayed its “resolve to defend its rights,” the Iranian military chief added, saying the counterstrikes proved that the US risked heavier retaliation “if it sought to keep up its acts of mischief.”

The Islamic Republic, though, has specified the “ultimate revenge” as regional endeavor towards expulsion of all American forces from the region, saying the prospect would both restore regional security.

wo days after the airstrikes, Iraq’s parliament voted in favor of having all US-led forces leave the Arab country. Caretaker Prime Minister Adel Abdul-Mahdi has also asked Washington to dispatch a delegation to Baghdad to initiate preparations for the withdrawal of the American troops, who number around 5,200, and influential Shia cleric Muqtada al-Sadr called for a "million-man" march against the American military presence.

For his part, Akar affirmed that General Soleimani’s assassination touched off a series of back-to-back and sensitive developments in the region, “which can be extremely worrying.”

He, however, said the entire region stood to benefit from attempts at preservation of stability and calm.

The Turkish defense chief also hailed the countries’ “amicable and brotherly” relations, and urged joint efforts aimed at safeguarding regional stability “in order not to allow terrorists to abuse any opportunity for intensification of regional tensions.”